“Victory over the British,
A Star Spangled Celebration!” 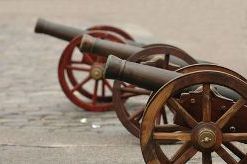 War of 1812.  Costumers from Somewhere in Time, Unlimited (SITU) gathered for their annual Winter Event.  This year, it represented the War of 1812 and celebrating an American victory over the Brits!

The Mississippi River was still the frontier.  Lewis and Clark had only been back from the Pacific Ocean for a few years.  John Paul Jones had just begun to fight and Dolly Madison rescued the portrait of George Washington from the burning White House! Colonel Andy Jackson sent the British skedaddling back to Old Blighty.

SITU participants could arrive as a frontier man or woman, perhaps a pirate, or a soldier or a sailor, a settler, or a Native American, or even French.  Some wore full court regalia in wig, breeches and panniers, or a la mode Regency.  Others were invited to wear their best buckskins.  Whatever the attire, all were there to celebrate our Victory over the Brits!

This was a fun and easy to costume gathering.  It was held during daylight hours in order to accommodate those who needed to travel long distances in winter conditions.

Below, you will find images from this gathering.  You might recognize a friend or two!  Special thanks to Miss Julie for capturing these images for posterity. Thank you for visiting our webpage.

If you would like to learn more about this historical costuming group
based in the greater Seattle, Washington area of the USA,
please feel free to visit our homepage.

We look forward to having you join us
in the near future for some fun and frivolity
in historical attire!